On the evening of 16th May, I spent a few bottom-numbing hours sat on a Perthshire river bank, amongst wild garlic, scent filling the air.

A wasp was busy collecting wood off of a nearby branch, accompanied by evening bird song.  The morning's rain gave way to an evening of blue sky and sun.  There was a bit of a breeze, but the river, for the most part, remained mirror-like in the slow flow.


A Grey Wagtail hopped across a toppled tree that bathed in the shallows of the river's edge.  The tree hadn't fallen in the wind, the reason for its felling was evident by the remains of it's trunk.  Looking like a giant sharpened pencil, with gnawing marks left by large teeth, this was the work of Beavers, and what I was here to hopefully see. 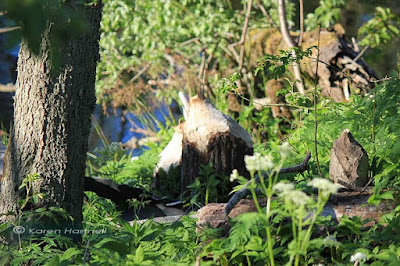 After an hour, there was still no sign of the large rodent.  Spirits were lifted with the sudden whizzing past of a bird, the turquoise flash giving away the Kingfisher as it sped past.

Not long after, finally, our first Beaver!  It was the female.  Swimming gracefully, head out of the water, looking around.  What a beautiful creature.  Sadly, persecuted, but they will be getting the legal protection they deserve soon.

Unfortunately, no sooner had the female appeared, she disappeared. More patient waiting, and we saw her once again.  Following her movements through the binoculars I saw her perform an almost ripple-less dive down beneath the surface.

Once the coast was clear, we walked further along, and saw the male's lodge.  And shortly after, the male came swimming into view, and into his home.  I caught sight of him again, moving along the edge, beneath branches and roots, and then his back as he moved out of the water, until I couldn't see him.  Another brief glimpse and that was it for the watch. I've been wanting to see the Beavers for a number of years and it was very exciting to finally be able to watch them.


© Karen Hartnell - all images and text may not be reproduced in any way.
Posted by Karen the Artist at 14:11 No comments:

Email ThisBlogThis!Share to TwitterShare to FacebookShare to Pinterest
Labels: Beaver

The Waxwing, with it's punk-like 'hairdo', is a bird I had been wanting to see for a long time.  I missed the influx last time around.

I was on holiday in the north of Sutherland recently, at Tongue, and while walking through Borgie Forest, I spotted a flock of birds seemingly restless in a Scots Pine.  I trained my binoculars onto them and was amazed to see Waxwings!  The first birds of the winter had only been seen arriving in the UK the previous week, so it was great to see them. 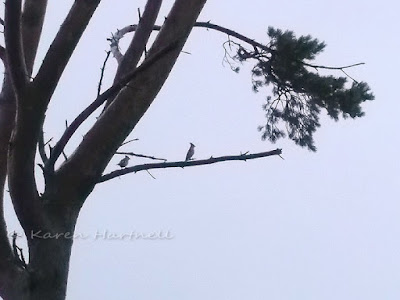 Unfortunately, the weather wasn't the best, with constant drizzle.  I opted to take my wee compact digital camera with 3x zoom as it fits in my pocket, instead of my bulky bridge camera with 26x zoom.  Therefore, the photos and video I managed to get for my records are not award-winning, but something to remember the sighting.

It is always a great surprise to see a bird when you are not actually looking for it!


© Karen Hartnell - all images and text may not be reproduced in any way.
Posted by Karen the Artist at 17:23 No comments:

After enduring several named stormed in a row, we were finally we were blessed with a sunny winter's day, so headed over to Callander for a couple of walks.

First, a walk up to a very windy and cold Callander Crags summit.  Fantastic views to Ben Lomond, Ben Ledi, Stuc a'Chroin and Ben Vorlich.  The Ochil Hills were white, and snow showers sped through the strath.

After the crags walk, we walked to Bracklinn Falls.


© Karen Hartnell - all images and text may not be reproduced in any way.
Posted by Karen the Artist at 12:22 No comments:

One of my favourite Perthshire walks, the Birks of Aberfeldy, always delivers on the waterfall front and the scenery helps to get up the numerous steps!  We extended the walk, taking the left fork after the Upper Falls, instead of the right path back to the car park.  This route gives a good view of the hills and Aberfeldy as you descend the minor road. 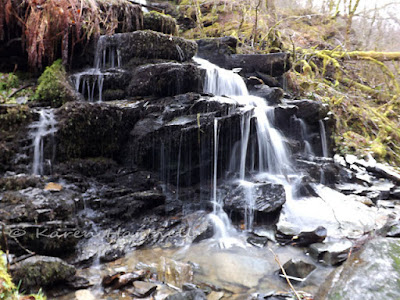 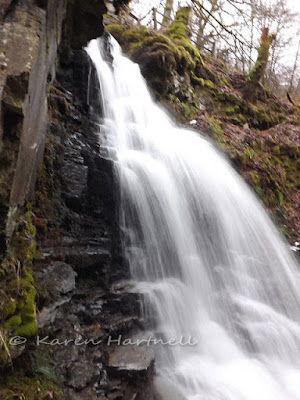 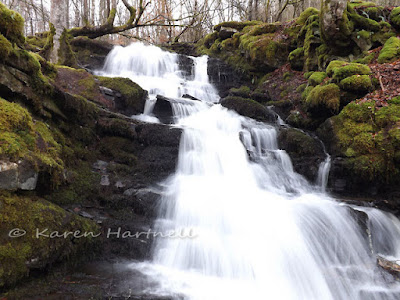 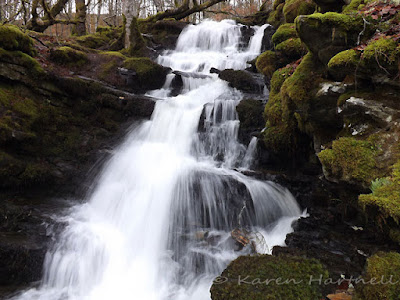 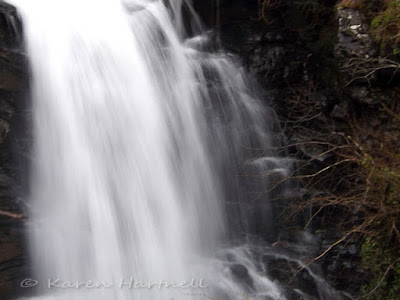 © Karen Hartnell - all images and text may not be reproduced in any way.
Posted by Karen the Artist at 12:22 No comments:

Email ThisBlogThis!Share to TwitterShare to FacebookShare to Pinterest
Labels: Birks of Aberfeldy

A picturesque sunrise, heralded good weather for the day. The Storr and Cuillins were cloud-free.  I sketched the Storr while my other half hiked up it.


The afternoon gave me my first sighting of Dolphins on the west coast!  I was scanning the Sound in front of Rona with my scope, and picked out a large pod jumping through the water. They moved back and forth, probably feeding as I could also see a large number of Gannets diving. Fantastic to watch, and the Dolphins would occasionally break through the waves and leap high.

Friday's weather was wet and windy, but we did manage another walk down to Brother's Point and the seals popped up once again!  No pictures due to the weather.

A flock of Fieldfare flew past the house.

Another great week on the Isle of Skye.

© Karen Hartnell - all images and text may not be reproduced in any way.

Posted by Karen the Artist at 12:22 No comments:

Mist clung to the hills behind the house this morning.  A female Chaffinch perched on the garden fence.

We were just about to depart the house on a walk, opening the gate for the car, I looked up over the Sound and caught sight of a couple of passing Gulls - with something much bigger.  I grabbed the binoculars from the car and confirmed what I thought - a White-tailed Eagle!  It soared along cliffs and disappeared from view. I didn't see it flap its wings once, just glided on the breeze.
Following the eagle excitement, we drove to Lealt, taking the short walk to the edge of the cliff to see old mine works down on the shore.  Then we drove further on to another nice viewpoint looking along the Skye cliffs. Ravens flew overhead.

Next stop was Portree. I didn't manage to spot either of the resident White-tails, but Herring Gulls were enjoying a spot of bathing on the shore.
Next on our travels was the Fairy Glen, near Uig.  I didn't get to walk far as I had limping Labrador with me, but as I had already see the stunning rock formations in good weather, I wasn't too disappointed.  I got a nice view of a Buzzard who was perching at various locations near our parking spot. 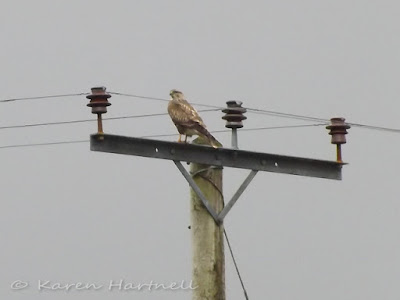 The afternoon's walk was down to Brother's Point again.  There were many Common Seals, heads bobbing up and down watching us, as well as some bathing on the nearby island, together with gulls and Cormorants. 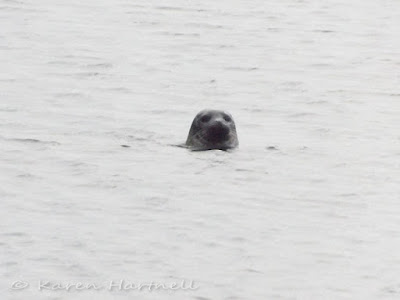 We were blessed with a clear night, so we sat outside looking at the stars.  I could see the Andromeda Galaxy but I couldn't work out why the sky wasn't as dark as the previous night.  The photos revealed an Aurora in progress!  It gradually intensified and we could clearly see beams of light pointing up into the night sky.  Although to the naked eye there was no colour in the light, the camera showed green, white and a bit of red. It was amazing to watch.  Here's a stunning photo taken by Graeme:


© Karen Hartnell - all images and text may not be reproduced in any way.
Posted by Karen the Artist at 10:23 1 comment: